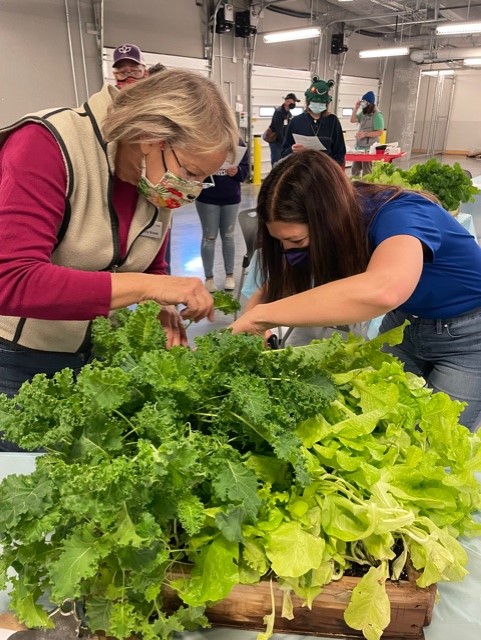 OLATHE — Grow big or go home was the motto of this year's Willie and the Salad Bonanza Contest, which concluded on Nov. 6.

The annual contest challenges teams of elementary, middle and high school students to grow the largest quantity of select leafy greens from seeds in a single container over a 47-day time span. After 47 days, each team's greens are measured and weighed at Kansas State University's Olathe campus and the documentation about their growing methods is evaluated.

"The contest is designed to teach students about the science involved with plant growth and help them form a better connection between food production and personal consumption," said Martha Nowak, K-12 coordinator at K-State Olathe and contest organizer. "Students were able to apply concepts about plant growth that they have learned in school into a hands-on project that let them see the effects of their knowledge and decisions."

The contest, which aligns with the Next Generation Science Standards, is a collaboration by Kansas State University's Olathe campus, Food Science Institute, department of horticulture and natural resources and the K-State Horticulture Research and Extension Center, along with Compass Minerals, Missouri Organic Recycling, 4-H and public schools.

Participation in the contest had more than 150 registrants, Nowak said.

The winners in each division were determined by taking the harvested biomass in grams divided by the volume of the container in which it was grown. Each declared winner had the highest density number.

Winners of the 2021 Willie and the Salad Bonanza Contest are as follows:

Fourth place — Jack Bailey and Abbie Lloyd of Olathe North High School, with sponsor Greg Krenke. They used ProMix Biofungicide Mycornizae Soil, which contained pearlight, peat moss, vermiculite and ground up wood chips. ProAqua Plant Nutrition from Compass Minerals was used according to package directions and the plants were grown in a greenhouse with the average temperature of 75 degrees Fahrenheit.

Fifth place — Kennedy Clark, Emmalee Magruder, Lily Anderson and Caroline Herman of Olathe North High School, with sponsor Greg Krenke. They used a mixture of soil for their base, combining 1/4 from Missouri Organic Recycling and 3/4 of ProMix Biofungicide Mycornizae Soil. ProAqua Plat Nutrition from Compass Minerals used according to package directions. The greens were grown in greenhouse at the average temperature of 75 degrees Fahrenheit.

The winning schools for each category will be awarded a plaque with the name of each team member and team sponsor.

Learn more about the Willie and the Salad Bonanza Contest at olathe.k-state.edu/saladcontest.