OLATHE — Jackie Spears has been named the interim dean and CEO of Kansas State University's Olathe campus, effective June 1. Spears, who currently serves as the campus' associate dean for academic affairs, will lead the campus while a national search, scheduled to begin in the fall, is completed for a permanent dean and CEO.

"In the short time I've known Dr. Spears, I've been impressed by her keen knowledge about the academic programs at both campuses and about the university as a whole," said Charles Taber, provost and executive vice president. "This, coupled with her ability to build on relationships in Manhattan and her involvement in the K-State in KC task force, are assets for enhancing Kansas State University's impact in Greater Kansas City. I appreciate her willingness to serve in this important position."

Spears was appointed the associate dean for academic affairs in September 2018, in which she oversees and guides the various degree programs, enrollment and recruitment efforts at the Olathe campus. Her priorities have been on strengthening the campus' existing academic programs in animal health, food safety and security; working closely with the Manhattan campus to provide access to students and industry in Greater Kansas City; and establishing partnerships with community, private and public colleges in the region as a way to further develop a pipeline to Kansas State University's degrees for students living and working in the metro region.

Spears also is a collaborator on a U.S. Department of Agriculture-backed project that helps high school teachers in Kansas and Missouri develop robust curricula and educational materials around biotechnology and animal health. The goal is to inspire and educate the next generation of talent who will work at the National Bio and Agro-defense Facility, or NBAF, in Manhattan and at other federal facilities and companies throughout the Kansas City Animal Health Corridor.

"I've had the honor of working with Dr. Spears for many years throughout her various roles at the Olathe campus," said Ralph Richardson, dean and CEO of the Olathe campus, who is retiring May 31. "Her robust knowledge about the university and the Olathe campus will be instrumental in bridging the leadership continuity and ensuring that we continue to do good work."

Spears has served in various roles at Kansas State University since 1985 and has been a part of the university's Olathe campus for most of its operations.

Spears first joined the Olathe campus in 2012, serving as interim associate dean for academic and research programs. In July 2013, she also was named acting CEO of the campus and served in both capacities until December 2013. Following these interim leadership roles in Olathe, Spears resumed her full-time roles at the Manhattan campus as a professor of curriculum and instruction and director of the Center for Science Education in the College of Education.

In January 2016, she once again joined the Olathe campus in a part-time role that focused on helping regional school districts and higher education strategically reform and improve STEM education so that students' knowledge and skills better translate to industry needs. She also worked with higher education on putting more emphasis on STEM-based bachelor's and master's degrees so that the universities can better meet the industry needs for an increasingly qualified workforce.

Throughout her tenure at Kansas State University, Spears has been a long serving member of the faculty senate.

Spears earned a bachelor's and master's degrees in physics, a doctorate in curriculum and instruction — all from Kansas State University. 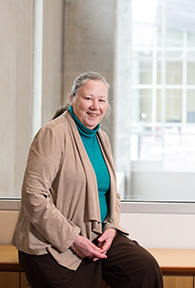