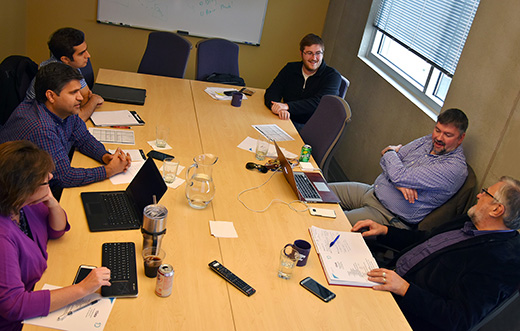 The 1Data teams discusses what data aggregation will look like in the human-animal health database that is being developed.

OLATHE — Efforts are ramping up on 1Data, a collaborative human and animal health project by researchers at Kansas State University and the University of Missouri-Kansas City that is designed to help save lives and improve the quality of life for humans and animals.

The goal is for 1Data to be fully functional by the end of 2021. Currently, the project is about a year ahead of schedule.

The researchers are developing a clearinghouse platform for an array of standardized pre-clinical human and animal health data. Once completed, researchers in industry, health care and higher education can mine the platform for specific cross-species information. They can use this information to fully simulate traditional research with animal models – decreasing the need for animal models while also identifying congruencies between human and animal diseases. This helps enhance the regulatory process and accelerates the development of drugs and medical technology for people and animals.

In January, Wyckoff joined K-State Olathe in a part-time role as director of 1Data, which is housed at K-State Olathe. The appointment enables Wyckoff to finalize the project's development and its human-animal health database during the final, crucial phases.

"Being the director of 1Data will allow me to focus on accomplishing this ambitious project and is enabling us to already build a collaborative set of researchers who can work inside the 1Data environment," Wyckoff said. "The partnership between UMKC and K-State Olathe shows that the state line should not be a barrier to moving life sciences research forward in the region."

In addition to Wyckoff's part-time appointment at K-State Olathe, Josh Staley has joined 1Data as a graduate research associate. He received his bachelor’s degree from the University of Missouri-Kansas City in December and is earning his master's degree in veterinary biomedical sciences at K-State Olathe.

"I am very excited to be a part of this team and I look forward to working with them for years to come," Staley said.

Staley and Reza Mazloom, graduate student in computer science at Kansas State University, are populating the database with human and animal health information supplied by industry and government partners.

Once the database is populated, researchers will begin testing "orphan diseases" — rare diseases that affect fewer than 200,000 people nationwide. They will look at scenarios and approved therapies for these diseases and test them against models generated by the platform to see whether the platform produces results that match the actual ones from the supplied industry and government health information.

Researchers also plan for a post-doctoral student to join the team mid-year.

"Working together across species and organizations to improve human and animal health will help enhance research and ultimately improve the lives of all species," Jaberi-Douraki said.