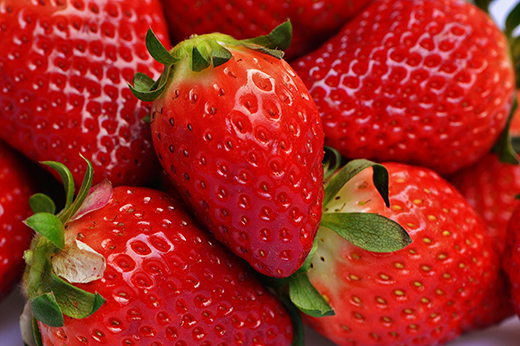 Gude focused on how to increase the availability of Kansas-grown strawberries and how to keep the berries from deteriorating in nutrition, flavor and physical appearance once harvested. Her research looked at whether strawberries could be grown in Kansas under high tunnels — a low-cost alternative to greenhouses; which variety of berries fared the best in Kansas' summer heat; and the quality of the fruit that was produced. Answering these questions could help Kansas berry growers increase the availability of locally grown strawberries.

"In recent years, we've seen increased consumer demand for locally grown food," Gude said. "Consumers cite buying locally grown food because it has a better taste, is fresher and supports local businesses in the community. While a food feasibility study in Kansas City found that growers and consumers are highly interested in buying fresh, locally produced berries, berry production in Kansas is difficult."

June-bearing strawberries — the variety frequently grown in Kansas — are planted in the fall and harvested in mid-May to June before extreme summer heat. The challenge to this system with high tunnel production is that it requires winter crop room, Gude said. The researchers' solution to this challenge was to grow spring-planted, day-neutral strawberry varieties that were planted in early April and harvested from mid-May until mid-fall.

Temperature has the largest influence on strawberries' moisture, firmness, flavor, color and antioxidant levels. Other factors such as weather, sunlight, irrigation and how the berries are picked also affect berry quality.

"Strawberries are very sensitive and are easily prone to damage, especially from temperature," Gude said. "A majority of strawberries are grown in California because of the state's continual optimum temperature and then transported across the U.S. in five to 10 days. In that time, though, the fruit can lose 30-50 percent of its nutritional constituents."

Over the course of three years, Gude and fellow graduate students at K-State Olathe grew, harvested and analyzed six strawberry varieties from high tunnels at the Horticulture Research and Extension Center in Olathe. The high tunnels provided even light distribution, increased heat retention and protected the fragile berries from severe weather. To increase fruit yields and fruit quality, researchers also developed an evaporative cooling system for the high tunnel system that lowered the internal temperature of the fruit when temperatures exceeded 85 degrees Fahrenheit.

Strawberries were planted in April 2014 and April 2015 and harvested weekly from May to October — four months past the traditional strawberry production season in Kansas. Once harvested, berries were evaluated for their marketability, nutrients and flavor.

Marketable berries were those that had an ideal weight, size, color, sugar content, firmness and lacked blemishes on the skin. The strawberry varieties Monterey, Albion, Portola, San Andreas and Seascape consistently produced the most marketable strawberries. Albion and Monterey produced the sweetest and most ruby red berries of the bunch.

When it came to numbers, the strawberry varieties Evie 2, Portola and Seascape produced the most berries, with Portola coming out on top. Portola strawberries also were larger and more marketable than the other two varieties.

Researchers also found that the strawberries grown in high tunnels had a longer shelf life than those that were not. Berries could remain in storage for seven to eight days before their nutritional quality began to deteriorate. Nutritional analysis revealed that all six strawberry varieties retained the expected levels of nutrients, including phenolic and antioxidant capacity.

"Overall what we saw was that growing strawberries in high tunnels had pretty big benefits," Gude said. "These included an increased growing season and better strawberries when it came to berry size, nutrients and numbers."

For Gude, though, these findings raised one important question about the strawberries that was larger than their production season and marketability: Would consumers enjoy them?

To answer that, Gude collaborated with Marianne Swaney-Stueve, research assistant professor of human nutrition and manager of the Sensory and Consumer Research Center at K-State Olathe. A taste test was performed on 178 participants to look at which variety of locally grown strawberries consumers preferred. Participants chose the Albion and Monterey strawberry varieties as the highest in overall flavor because of their high sweetness and redness.

The studies are an offshoot of the research originally funded by a 2014 Walmart Foundation grant to the University of Arkansas for distribution, which was awarded to Rivard for research on how to increase strawberry production in the U.S. — particularly Greater Kansas City.