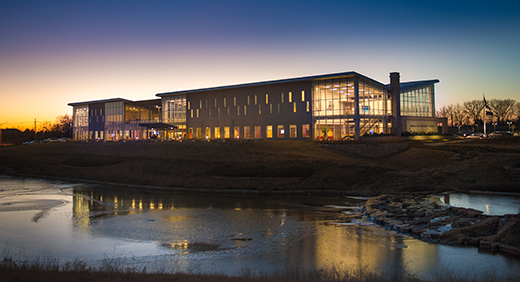 OLATHE — Less than a year after an energy audit, the savings are adding up for Kansas State University Olathe while the campus' carbon footprint is shrinking.

In February 2015, the Kansas State Olathe campus conducted an Energy Optimization Assessment with P1 Group Inc., a local single-service solution provider that specializes in mechanical, electrical and plumbing construction and energy savings. The assessment was a comprehensive energy audit of the heating, ventilation and air conditioning, or HVAC, system on the campus.

While the HVAC system was designed for high efficiency, it was exceeding its projected energy use and output, said Andrena Keesee, site and facilities operations and services manager at the Kansas State Olathe campus. Energy expenses were surpassing those built into the campus' operating budget after just two years of use with the HVAC system and the campus at only half occupancy.

P1 Group and Kansas State Olathe used a retro-commissioning approach to evaluate the campus' HVAC system. The approach looked at how the system was designed and how that existing system could be optimized so that it fulfilled the current needs of the campus and also could scale up as the campus grows.

"Often the systems in a building are designed to meet the future needs of the occupants rather than their immediate needs," said Russell "Rusty" Roderick, vice president of P1 Group. "What we did was review the original design and compare it to the intent of how the building would be operated versus how it currently operates. It was essentially a MRI on the building that helped us explore and then assess the needs in order to address those needs."

The campus is seeing big results nearly one year after the assessment and improvements.

"We're really happy with the results," Keesee said. "Not only were the benefits in reduction of use and costs of the Energy Optimization Project immediately realized in the first few months of project completion, but results from the Optimization Assessment has provided valuable information about the HVAC system. This will aid in future energy savings measures as the building occupancy and activity increases over the next few years."

Kansas State Olathe opened April 26, 2011, in Olathe, Kansas, as an education pipeline for the Kansas City metro area and the Animal Health Corridor. The $28 million, 108,000-square-foot building is a mixed-use facility containing research laboratories, classrooms, meeting space and kitchens for research and development that serves both industry and higher education. The campus is LEED Silver certified.