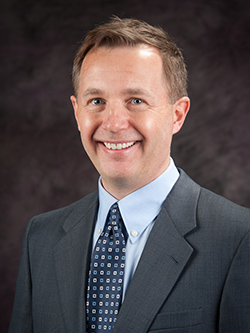 In the role, Williamson oversees all aspects of financial management for the campus and also supervises employees in the facilities, security, IT and events management units.

Some of his key duties at the campus include managing revenues, expenditures, payroll, capital improvements, bond issues and banking relationships. He also is tasked with preparing, monitoring and overseeing the annual budget and finances for K-State Olathe and working with the K-State Olathe Innovation Campus Board, Johnson County Education Research Triangle Authority and Board of Regents for approval and reporting of the campus' budget and finances.

"We're happy to welcome Harry Williamson to the K-State Olathe family," said Jackie Spears, interim dean and CEO of K-State Olathe. "His experience with financial operations at K-State and government is extremely beneficial to K-State Olathe and helps us better strategize for the future. We look forward to his leadership in helping us determine what programs and initiatives to invest in that continue K-State Olathe's growth and support the upcoming needs of Greater KC's workforce."

Prior to joining the K-State Olathe team, Williamson was the director of financial and administrative operations for K-State's Global Campus for 11 years. There, he managed a $45 million budget and developed reports, financial analyses and forecasts to help units manage their budgets and ensure institutional policies were followed. He also worked with staff members to develop business plans and memorandums of agreement for academic programs.

Before that, Williamson was a fiscal officer at the Kansas State University Veterinary Hospital for three years. In the role, he supervised various financial operations for the organization, including financial reporting, budgeting and management of client payment agreements. He also oversaw invoicing, patient record auditing, staff/student travel administration, and all other hospital fiscal operations.

Williamson also spent a year as accountant III for Kansas State University Sponsored Projects, in which he managed grants and contracts funded by external sources.

He also has experience with local government, having served for two years as accountant III/fiscal officer for the City of Kansas City, Missouri. There, he oversaw the management of more than $10 million in funding for the Health Services Program and its use by the city's health department.

Williamson earned a B.S. in Accounting and Business Management from William Penn College in Iowa, a M.S. in Business Administration from Upper Iowa University and holds a Certificate of General Insurance.