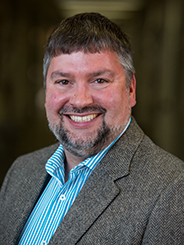 Gerald Wyckoff's educational background is as a molecular evolutionary geneticist, finding faint signatures of positive selection in a sea of genomic noise. This led him to become involved with large scale genomic, and later proteomic, projects.

At the University of Missouri-Kansas City, he has have developed collaborations with structural biology faculty, in part to extend his knowledge of how to apply large-scale screening techniques to structure-based problems. He has helped develop software applications for Mass Spec analysis relating to analysis of divergent peptides as well as cross-linking analysis. In addition, he has helped create databases for large scale synthesis of chemical and biological data in species as diverse as fish and humans. All of these problems have as a common theme the development of tools to make sense out of large scale data where noise is high and signal is low.

His recent work has led to the development of software that is being commercialized, and he continues to try and find ways to apply his evolutionary knowledge to the problems inherent in big data drug discovery at the interface between animal and Human health.