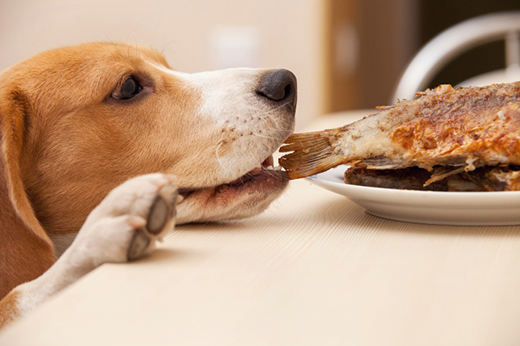 Pet owners should try to keep pets' meals and treats as normal as possible during the holidays in order to avoid health problems, says a Kansas State University veterinarian.

MANHATTAN — This holiday season, some pet owners may be serving up trouble when giving their dog or cat a taste of the meal.

"Thanksgiving is a time when a lot of people think that giving tidbits of the food to pets it thoughtful," said Kate KuKanich, associate professor of clinical sciences in Kansas State University's College of Veterinary Medicine. "A small piece of turkey breast, which is low in fat and salt, is OK for a dog or cat in moderation. But, because we love our pets, we can often overdo it and ignore food safety rules that affect both our health and the health of our pets."

Each year around Thanksgiving, KuKanich and colleagues at Kansas State University's Small Animal Hospital treat multiple cats and dogs that have pancreatitis — an inflammation of the pancreas. The condition often manifests in pets that have eaten fatty human foods, such as meat trimmings and bacon, rather than their normal diet. Foods high in salt can be hazardous to pets with heart disease.

KuKanich advises pet owners to keep pets' meals and treats as normal as possible during the holidays in order to avoid a recipe for disaster. She also said that the same food safety rules that apply to humans also apply to pets. These include:

• Turkey and other meats must be cooked to 165 degrees Fahrenheit before dogs, cats and humans eat it. Raw and undercooked meats as well as their juices can contain germs that can cause serious illness in both people and animals.

"Sometimes people think that it's OK to give a pet raw or undercooked meat because pets' ancestors come from the wild," KuKanich said. "Any raw meat, such as the gizzard of the turkey, can make our pets sick because they can be contaminated with bacteria. A meat thermometer is best way to know our meats are food safe and cooked to the proper temperature for everyone's safety."

• Bones, such as a hambone, drumstick or rib, also can be dangerous because they can become lodged in the esophagus of dogs, requiring emergency endoscopy or surgical removal.

• Pet owners should wash their hands in warm, sudsy water before and after feeding their pet. Pets' food and water bowls and measuring cups used to dispense their food also should be cleaned regularly.

"Handwashing prior to cooking, eating and food storage is important to keep food and family members safe," KuKanich said. "It also is a good idea to either avoid petting our furry friends during food prep and meals or to wash hands frequently so that we keep both the food and the pets safe."

• Juices from raw turkey and other meats will contaminate anything it touches in the kitchen, including counter space, utensils, other food and pet dishes.

• Pets and people should not eat cooked and dairy-based food that has been sitting at room temperature for longer than 2 hours. Two hours is the longest food should sit at room temperature before it is refrigerated or frozen, according to a food safety specialist at Kansas State University Olathe.

Additionally, while sweets and deserts may affect our waistline, they can be hazardous to an animal.

"Avoid giving sweets to pets over the holidays, as some of these can be toxic, such as chocolate, raisins and xylitol, a type of artificial sugar," KuKanich said. "Others, such as pumpkin pie, are just too high in sugar and can lead to an upset stomach."

A Thanksgiving feast for some pets may mean canned food rather than human food or the usual dry kibble. Canned food can be a healthy option for pets, though there are some food safety rules to remember, KuKanich said.

"Food safety is of the upmost importance for both our pets and us, particularly during a holiday that revolves around food and family," KuKanich said. "When tempted to offer people-food to your pets, a good thing to consider is if it's food you would not eat or feed to your child, you should not give it to your pet."