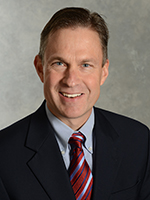 Roy Loepp comes from a family farm in central Kansas near the town of Inman. He completed his B.S. in Milling Science from K-State in 1989, spending 6 years with Cargill and the last 24 years with Seaboard Corporation. While at Seaboard, he completed an M.B.A. in Finance at the University of Kansas.

His experience includes management of plants, capital projects, information technology projects, senior leadership, and critical roles in privatization of state enterprises. He has traveled to and worked extensively with the Seaboard's affiliated milling and trading locations in more than 30 countries.

Loepp also has served the milling industry extensively through the International Association of Operative Millers, serving in one or more official capacities continuously since 1995. He was elected as IAOM president in 2015/16 in addition to holding other executive positions, including treasurer, where he led the reorganization of the association's investment portfolio.

Other industry service includes work with task forces for Hard White Wheat proliferation, Karnal Bunt control, the World Bank's roundtable on Corporate Social Responsibility in the food industry and the Flour Fortification Initiative. He has presented and represented industry interests to numerous governmental and NGO groups across the world.

Elsewhere, Loepp presently serves on the board of directors for Agua Viva International and has held numerous leadership and volunteer positions through church and in the arts community.

He is married to Lydee (B.S. K-State 1989) and has three daughters: two of whom also have graduated from K-State.