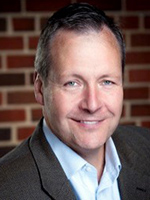 John Bucksath joined KCAS Bioanalytical and Biomarker Services in May of 2016, where he serves as chief executive officer and board member. He is responsible for the overall strategic direction and future success of the organization.

Previous to joining KCAS, Bucksath worked at Analytical Bio-Chemistry (ABC) Laboratories. He has served in a variety of roles, starting as a chemist and working his way to leading the organization's technical operations in 2003. He eventually succeeded as president and CEO/board member starting in 2012.

Under Bucksath's leadership, ABC Laboratories and the acquired Morse Laboratories were transformed into a growing and award-winning organization as evidenced by 3 years running CRO Leadership Awards recognition by the pharmaceutical and agrochemical industries. During his tenure as CEO, he lead the organization to drive double-digit growth and major quality initiatives. ABC Laboratories was successfully sold to the Evans Analytical Group (EAG) in 2015.

Bucksath serves on the Missouri Biotechnology Association’s (MOBIO) and BioKansas' Board of Directors. He is a member of the University of Missouri’s Research and Development Advisory Board. He also is a member of the Mizzou Venture Mentoring Program, focused on mentoring startup companies in life sciences industry. He has served as an observing board member for two early-mid stage biotechnology companies focused on novel pharmaceutical new chemical entities.

Bucksath's undergraduate education in biology and chemistry was obtained from Central Methodist University and a Master's of Business Administration from the Olin Business School – Washington University in St. Louis.