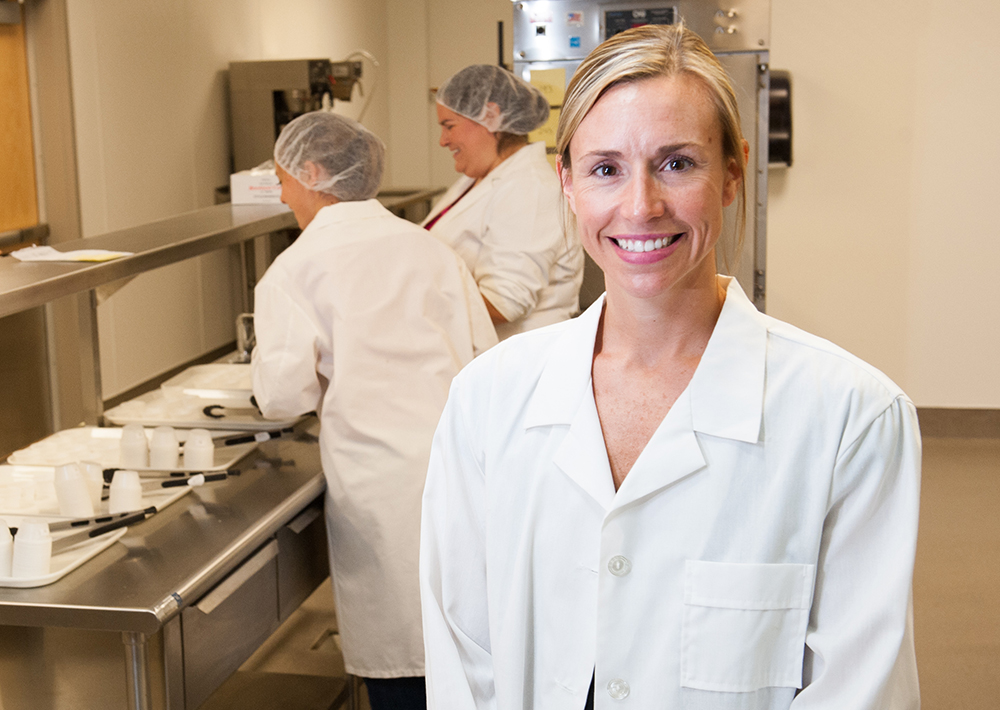 Marianne Swaney-Stueve has a lot of small shoes to fill when it comes to pinpointing the opinions a certain consumer group has about food products.

Swaney-Stueve is a research assistant professor in Kansas State University's department of food, nutrition, dietetics and health, and manager of the Sensory and Consumer Research Center at K-State Olathe. At the center, she and colleagues use sensory testing to look at consumer preferences about food and other products. Qualitative and quantitative information from these studies are then provided to industry partners, who may adjust product ingredients, preparation methods or marketing to better meet consumer interests.

While the center's tests are largely conducted using adult volunteers and volunteers in middle school and high school, Swaney-Stueve prefers — and enjoys — learning the thoughts and feelings about food products from consumers still in grade school.

"Not a lot of people in the industry want to take on kids because they're more difficult to work with than adults," Swaney-Stueve said. "There are a lot of approval processes, it can be difficult to determine what kids are trying to say with their limited vocabulary, and kids are just brutally honest. I like their honesty, though, and I like the fact I don't know what kind of responses I'll get going into a study."

The '90s and early 2000s saw a boom in food products tailored toward kids that went beyond cereal and candy. Companies now produced kids' lines of yogurt, drinks, prepackaged lunches, oatmeal, snacks, fruits, vegetables and more. As the number of kid-tailored foods grew, so did Swaney-Stueve's interest in understanding this consumer group.

"Around the time I started my master's degree, I wanted to look and see how kids tasted and whether it's the same as or different than adults," Swaney-Stueve said. "At the time, that was too big of a project for my master's, so I had to focus on something different."

After earning her master's degree at the University of California-Davis, Swaney-Stueve returned to the University of Missouri, where she earned her bachelor's degree, to earn her doctorate — but under one condition: she could do kids research.

Upon being told by her advisor "better you than me" when it came to focusing on kids, Swaney-Stueve began a project in which she worked with children to compare their taste perceptions to those of adults.

While kids are known to have different taste preferences than adults, she questioned whether kids were actually tasting something different than adults. She found that kids in elementary school were able to taste the same as older kids/teens and even adults, although they used different words. For example, fourth graders were frequently using the word "barbecue" to describe the flavor of roasted peanuts because they were unfamiliar with the word "roasted."

Currently, Swaney-Stueve is looking at whether emojis can replace the Faces Rating Scale that adults use to have kids identify how they feel about something or the level of pain they are experiencing.

"When the scale released, it was controversial and heavily criticized," Swaney-Stueve said. "The cartoony face drawings leave a lot up for interpretation, and if you're a girl or in another country, the scale doesn't relate to you. Emojis are used around the world, though. We've been having kids use emojis to identify how they feel about certain food products and have seen that kids immediately recognize them and know what words and feelings they represent."

She will present this research at an upcoming conference.


Getting a taste for food science
"When I was little, I wanted to be an automotive engineer and design DeLoreans," Swaney-Stueve said. "I loved DeLoreans and I loved cars. But, I especially loved DeLoreans because of how the doors opened."

Swaney-Stueve's father had other plans for her, though. A friend of William Mitchell, former dean of the College of Agriculture, Food and Natural Resources at the University of Missouri, her dad told Mitchell his daughter would be attending Mizzou, she liked science and math, and he wanted her to have a job when she graduated. Mitchell's advice was to pursue food science, which Swaney-Stueve agreed to.

Swaney-Stueve's "aha" moment came during an internship at the Pillsbury Company. She was working in Progresso's soups and sauces unit looking at how to address customer complaints about the clams in the clam chowder being too tough and rubbery.

After looking into different methods that could improve the tenderness of the clams, Swaney-Stueve went to the company's sensory unit to have the new versions tested.

"They were scheduling my clam project around things like ice cream and cake testing," she said. "I thought, 'Wait a second, you're like a services unit for a company and are testing all kinds of different things in the lab, and here I am in a hairnet and covered in clams day after day.' I was much more interested in seeing how the consumers felt about the product than the mechanics of making the changes myself. Seeing as how DeLoreans didn't go much further, maybe they needed more sensory and consumer researchers themselves."

Swaney-Stueve has been at K-State Olathe for five years. She and her husband, Jake, have three boys, Lincoln, Taft and Hayes. She and her family are members of the Church of the Resurrection, and are active in the Junior League of Kansas City, Missouri, soccer, basketball and baseball.