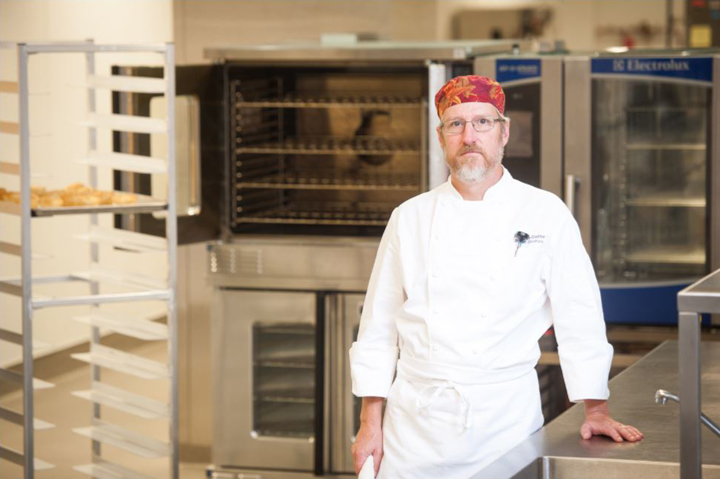 Chef Bryan Severns is the manager of food programs and services at K-State Olathe. He oversees the campus' five kitchens and the Food Innovation Accelerator, which supports small, food-based businesses with scaling up their production, refining recipes, doing product testing and more.


He also teaches the two-credit hour ASI 671: Meat Selection and Utilization course and a monthly Healthy Cooking for Diabetes class, which helps Greater Kansas City residents with Type-2 diabetes learn about nutrition and how to cook healthy recipes.

Severns finds joy in cooking, talking about food and teaching others how to cook. He specializes in fermented foods, protein fabrication and food safety — an area he emphasizes in every class and workshop he teaches. Despite this passion for food and having a mother who was a dietician, it wasn't until later in life that he pursued a culinary career.

A Colorado native, Severns grew up loving nature and outdoor recreation. This influenced him to pursue a bachelor's degree in fish and wildlife management at Montana State University – which he dropped out from.

"Dropping out meant I had to get a real job to pay the bills," Severns said. "One of my friends was working at the cool college hangout restaurant, so I applied to be a breakfast cook. Within a couple of weeks, I was addicted to the energy and atmosphere that comes with working in a restaurant kitchen."

Severns spent the next three years working for various restaurants in Bozeman, Montana. Deciding he was serious about cooking, he enrolled in the culinary arts degree program at Johnson and Wales University in Providence, Rhode Island.

His first job as a chef was at a luxury hotel in Boston, followed by three years as a sous chef at Dartmouth College in New Hampshire. After a stint at a downtown hotel in Chicago, he moved to Northeast Ohio to run a restaurant and inn. After seven years of rewarding work but missing out on a family life, he accepted a position at the New England Culinary Institute in Montpelier, Vermont, where for 11 years he taught about every class on campus and received several awards for his teaching.

Severns began looking at the next step in his career but realized he needed a four-year degree for the jobs he was interested in. A fellow chef at the culinary institute had taken an online course about meat science from Kansas State University and recommended the program to Severns, who was teaching meat fabrication. After completing some online food science courses from the university, he and Sarah moved from Montpelier to Manhattan, Kansas, so he could complete his bachelor's degree in food science and industry.

While in Manhattan, he was approached by the director of the Food Science Institute, who told him about the upcoming K-State Olathe campus and suggested to Severns that the new campus would benefit from his dual skillset as a chef and culinary food scientist. Severns agreed and joined K-State Olathe in 2011.

"My job is the perfect mix of culinary and geeky science, education and that extension mission of helping people," Severns said. "Some days are more focused on research and science, while other days it's more about making great food, teaching and food safety. I enjoy being able to take what I learned in the restaurant industry and in my food science education and using it to benefit people in a variety of ways."

In 2014, Severns earned his master's degree in food science and industry from Kansas State University. He also is a member of the Institute of Food Technologists.

Severns enjoys gardening, kayaking, cycling, fishing, hiking and taking walks with his Sarah. Recently, they participated in the Dig In Benefit from Cultivate Kansas City, fundraiser in which local chefs use local food to prepare dishes for attendees. Severns served on the organizing committee and they both volunteered as servers for the event.